As the COP26 Climate Change Conference gets underway, Imogen Davenport, Director of Nature-based solutions reflects on the effects of climate change on wildlife that we are seeing here in Dorset and explains the science behind a number of nature-based solutions which could help to tackle both the nature and climate crises at the same time.

Impact of climate change on wildlife in Dorset

As the COP26 conference starts, we’re all thinking about climate and what it means for us and our environment. In Dorset we are likely to see hotter, drier summers, warmer winters and more extreme weather (so summer rain, when it comes, is more likely to be a deluge). This might sound a bit familiar, and you’re not wrong, the effects of climate change are already being felt. Globally, the average temperature is already up by 1.1oC since 1850 – that’s 1.1 oC of the 1.5 oC that the Paris Agreement aims to restrict the rise to. And in southern England, average maximum temperatures are measurably up. So things are getting very tight; many people are seeing the Glasgow summit as something of a last chance saloon and the agreements made, or not made, are crucial.

At Dorset Wildlife Trust we are already seeing some of the impacts of climate change on wildlife in our nature reserves, for example: 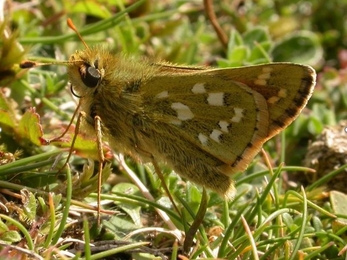 Food chains are incredible complex and are being broken by different species of wildlife reacting to change in different ways. Many insects are completely dependent on specific food plants. Breeding of animals is timed to coincide with the peak of food being available for young, be that plants, seeds or other creatures. Once that timing gets out of sync, then survival becomes a lot harder. Dorset’s marine environment is facing a multiple whammy of sea level rise, increased storminess, ocean acidification, sea warming and deoxygenation. There will be more detail about these issues in our second climate change blog coming soon.

What are nature-based solutions and how can they help?

Nature-based solutions are actions which benefit nature and people at the same time. They are not limited to climate change - for example creating new wildlife-rich, accessible green space will help improve our health through increasing exercise and providing a place for mental refreshment. In climate terms, nature-based solutions might help to either:

It is estimated that nature-based solutions could contribute 37% of the emissions reduction that is needed. It’s important though to say that nature-based solutions are not a substitute for reducing fossil fuel emissions. The science behind this is a complex businesses, and subject of many years of research; there are some habitats which have been well studied (such as woodlands and peatlands), and others we can be less confident about.  There are two aspects, carbon storage and carbon capture. Both are vital. Carbon stored has captured past emissions – and it needs to stay in storage -but this carbon can’t be counted as an emissions reduction. There are estimated to be about 3 billion tonnes of carbon in UK peatlands, 2 billion in grasslands and 1 billion in woodlands. This might be a surprising order but a lot of carbon is stored in the soil, almost all in the case of open habitats like grassland.

Carbon capture could be through the development of richer, deeper and more complex soils (for example restoring permanent grassland from cropped land or restoring peat bogs), through the capture of soil and sediments (instead of them running off into rivers, which causes a whole host of ecological problems), and of course, through growth of new vegetation. There is a huge focus on trees, and we need to see a lot more native woodland. To maximise the benefits though, this must not be at the expense of existing wildlife and carbon-rich habitats, like grasslands or heathlands, and natural regeneration should be encouraged wherever possible.

So what is Dorset Wildlife Trust doing to help?

Dorset Wildlife Trust is working on a number of nature-based solutions which could help. And importantly we hope to gather data as we go about them, so we can see what works and what is less effective, and help advise others. At our rewilding project at Wild Woodbury, we have just started soil surveys, so that we can see how the soil carbon changes over time as the site develops from former arable farmland. We’re also planning to create wetlands, which can function to hold water up and capture soil and nutrients and stop them running off downstream.

The UK’s Climate Change Committee has found that climate change is outstripping action taken so far, and identified eight areas for urgent action of which three are nature-critical. These are risks to habitats and species, damage to soils, and damage to natural carbon stores here in the UK. It's shocking to find out that the UK’s land is a net emitter of greenhouse gases, when it should be a net absorber.

The solutions lie both in habitat restoration at a much greater scale than we’ve seen in the past – we need to see 30% of land managed well for nature by 2030 - and in wide adoption of climate-friendly farming methods. There needs to be a 40% drop in emissions from agriculture by 2050. Methods which keep soil where it should be and not running into rivers and roads (especially as storm events increase) are one solution. Livestock management is also crucial to reduce direct emissions from methane and indirect emissions from animal feed.

Ensuring adoption of the best methods will require grant support and we still need to see how the government will incentivise management for nature and carbon in the new post-Brexit environmental land management scheme.  Dorset Wildlife Trust is working with farmers across the county to provide advice on natural solutions, and to learn from them as well.  Many Dorset farmers are as keen as we are to restore nature and get their carbon footprints down.

There is something everyone can do to help. As well as looking at your own carbon footprint and planning how you might reduce it, help us make these nature-based solutions stick. We need to see the sale of peat for gardening banned – help that happen by supporting The Wildlife Trusts' campaign. If compost doesn’t say it’s peat-free, it’s probably got peat in it (peat products are often labelled ‘natural’, which is ironically the case of course). And watch out for potted plants grown in peat as well.

We can all speak up for nature in the climate change debate as well – it’s not just about petitions and protests, just everyday conversations with friends and family are a chance to spread the word. If you can ask your parish or town council, councillors or MP what they are doing to help nature and climate recover together, then all the better. Here are some links for further information to help.

How to go peat free at home

Our homes and gardens have an important role in the fight against climate change. Help preserve vital peatland by going peat free.

Between March and May 2021, we worked with Participation People (a youth voice organisation) to train a group of amazing young people in…

Electro fishing on the Corfe River