Scientific name: Nematomorpha
Horsehair worms are parasitic worms of the clade Nematoida alongside their sister taxa Nematoda, the roundworms. The most famous trait of certain species of horsehair worms is the ability to alter the behaviour of grasshoppers and crickets to seek water, causing the host to drown itself to complete its lifecycle.

Horsehair worms’ adults are free-living in aquatic freshwater or marine environments and capable of moving across damp terrestrial areas. In the larval stage these worms must find an arthropod host to complete their life cycle, often killing the host, making them obligate parasitoids.

Eggs are laid in sticky strings underwater or on nearby vegetation depending on the species. When the eggs hatch, the larvae can encyst to survive until they are ingested. They are then eaten alongside vegetation or drunk with water by a suitable host which varies between species. Some species such as spinochordodes tellinii and paragordius tricuspidatus infest hosts such as grasshoppers or crickets that feed on vegetation with larvae attached.

Some larvae have a sharp spike-like appendage on their anterior end that acts as a needle that penetrates host tissues.
Once inside the host the larvae live inside the primary body cavity. The larvae feed on nutrients inside the host absorbing them directly through their skin and moulting as they grow. It may take a couple of weeks to months to complete the parasitic stage. This process rarely kills the host as the parasite relies on the host’s nutrients. The horsehair worm needs to ensure the host is near water before emerging as an adult.

This leads to the most famous trait of some species of horsehair worms, the ability to highjack the terrestrial host’s nervous system, altering their behaviour to make them actively seek out water. Spinochordodes tellinii and paragordius tricuspidatus species achieve this by causing grasshopper and crickets to jump into waterbodies drowning themselves when the horsehair worm reaches its adult stage. Once it encounters water, the horsehair worm burrows from the body to return to water to breed, killing the host if not drowned already.

A characteristic of horsehair worms is also the congregations adults form while mating known as a 'gordian knot'. This is a reference to the legendary impossible-to-untie knot, as adults gather and tie themselves into balls of knots while mating.

Horsehair worms are known for their terrifying ability in some species to highjack their hosts nervous system, altering their behaviour to actively seek out water. Once near water, the horsehair worm causes the host to jump into the water drowning itself so the adult parasite can return to reproduce completing the lifecycle. However, there is no need to worry as these worms are not parasites of humans, although there have been reports of finding them inside people and cats.

Which leads to their other fascinating ability of being able to survive in their adult stage if their host is eaten by another organism such as a frog, where they can survive through the digestive tract, coming out the other end still alive!

Precisely how the horsehair worm hijacks the infected host’s brain causing the change in behaviour to commit suicide by drowning itself is still a mystery and surrounded by much debate. Recent research into grasshoppers and crickets infected by horsehair worms shows they produce different proteins in their nervous systems compared to those not infected. This may be a form a molecular mimicry where the parasite causes changes in proteins in the hosts nervous system that function as neurotransmitters or are used as the bodies response to gravity known as geotactic signalling. 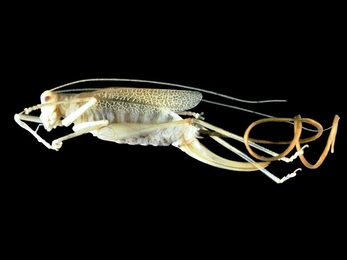 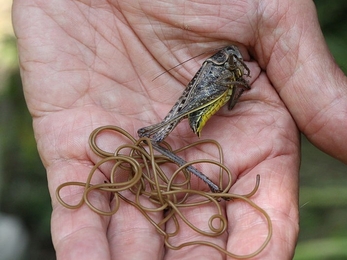 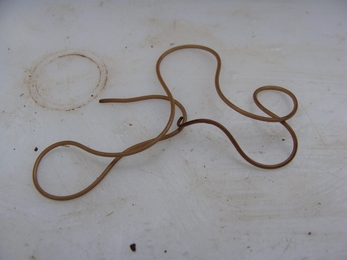